Plot Summary:
American Underdog is the story of Kurt Warner and his hard-won, yet meteoric rise from obscurity and poverty to the NFL Hall of Fame. 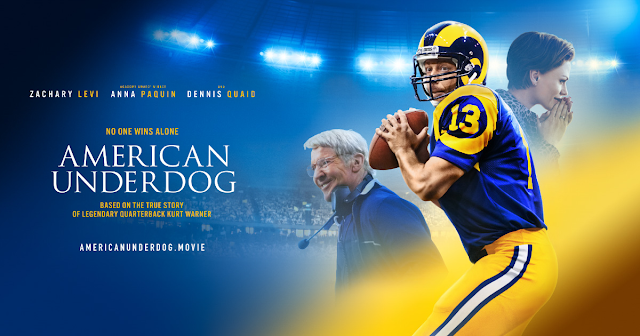 This film falls firmly and comfortably in the category of a feel good, inspirational film in every sense of the genre. That is by no means a criticism but, rather, an invitation to anyone that could use some inspiration. The hardships and struggles that Kurt and his family experienced together make their victories all the sweeter. Ultimately, though, the film's focus on personal integrity, family, and not giving up on your dreams rightly outshine any limited focus on his outward success or glory.
Other Reasons to Watch:
Reason to Pass:
American Underdog is available on various streaming services.

As always, I recommend checking out the IMDB.com Parents Guide just so that you are aware of any potentially objectionable material before deciding whether to watch it.
‬ Family Friendly American Underdog Christian Family Family Friendly Inspirational Movie Review Sports Uplifting