[While I recognize that this review is in a different format than usual,  it is the first movie review that I ever wrote and I couldn't bear to change it! Enjoy!] 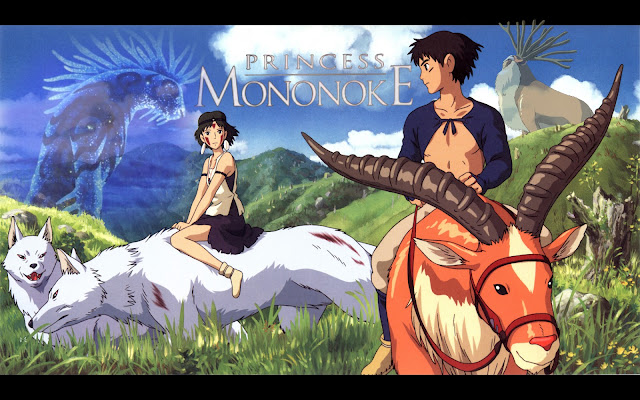 Princess Mononoke is the brilliant epic of a young prince, Ashitaka (Billy Crudup), who stands between the humans who destroy the forest for its wealth and the animal gods who would destroy the humans to save it.  The animation in this film is superb; while most animated films of its time (and many today) lack detail, luster or realism, the master storyteller Hiyao Miyazaki ensured that every frame is beautifully crafted. From the wide-shot landscapes to the droplets of rain upon the grass, Miyazaki's attention to detail is evident. 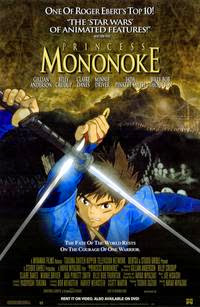 The score, prepared by Joe Hisaishi, is reminiscent of Howard Shore's Lord of the Ring's trilogy as it both captures and enhances the emotion of the film.  Perhaps, what makes this film so fascinating is that Miyazaki has created a world that is at once, fantastical and yet grounded in reality.

You may recognize some familiar voices as Minnie Driver (Return to Me and Phantom of the Opera) voices Lady Eboshi, the industrious leader of Iron Town.  Billy Bob Thornton also lends his talent as Jigo, a greedy monk sent by the emperor to behead the great forest spirit.  While the film was originally released in Japan, Disney has taken the initiative to make this and other classics available to a wider audience.

The beauty of the story is that it can be enjoyed by all different kinds of people, due to its many layers, subplots and themes.  While a casual viewer may simply see it as an entertaining adventure film, which it certainly is, a closer look reveals an insightful allegory about the good and evil within all of us and a call for introspection.  In my opinion, what makes a story believable and captivating is when it portrays evil as it is generally found, as part of a good person who believes they are either doing the right thing - or at least not doing anything wrong.  Lady Eboshi exemplifies this duality of the good and evil within all of us and demonstrates Miyazaki's unwillingness to settle for what some have called, "simple evil."

Princess Mononoke is not a story of wicked people destroying the innocent and peaceful forest creatures so much as that of both sides striving to defeat the evil within themselves.  In Ashitaka, we find the conscience of both the forest gods and humanity.  I highly recommend this film for the aforementioned reasons, though due to certain violent elements and mild language, it may be best to adhere to the PG-13 rating when considering watching it with children.
Anime Good Animated Films Good Foreign Films Hiyao Miyazaki Joe Hisaishi Movie Review Princess Mononoke Studio Ghibli